Nothing compares…paying respect to Prince

Posted on December 31, 2016 by CharliesTrail

Editor’s note: As it’s New Year’s Eve, I thought about some of my favorite stories from this year, and this is the one that first came to mind. Losing Prince was a big part of the year for a lot of us, and getting married was a big part of the year for Kari and me. This essay captures the grief so many of us went through this year (be it Prince, Bowie, Carrie Fisher, Gene Wilder or one of the other icons we lost) and it also tells our love story.

If you’re reading this, you’re probably a Prince fan. If you’re not a Prince fan, you might be dating or married to one.
Growing up, I wasn’t a Prince fan. When I was in high school in the late nineties and early 2000s, he was a symbol, and I didn’t understand.
“He used to be a Prince,” my dad, a now-retired Presbyterian pastor and musician, told me.
His outlandish dress, his high heels, his feminine dancing. He was somewhere between Madonna and Michael Jackson. My dad called him “the Dennis Rodman of pop.”
The first time I ever heard of Prince was in 1992. I was a nine-year-old looking for Bobby Brown’s latest album at Wal-Mart and I stumbled upon “Lovesexy” (featuring Prince posing nude in front of a purple flower) and my mom shook her head.
“Some people think he is a sex icon,” she told me.
Again, I didn’t understand.
I didn’t understand Prince’s versatility, nor did I understand his innovative, creative voice. He bended and broke genres, he fused pop, rock, jazz, blues and soul, and he did it his way.
He had a vision, a voice and he let it pour out of him like purple rain from the sky.
I remember the first time I really heard “Purple Rain.” My blues-guitar playing friend Hambone and I were bowling after a gig at a coffeehouse in Georgetown, Kentucky. The chorus was going and I remember not caring about bowling anymore. I wanted to hear it again. That spiritual outro stayed with me, sanctifying me.
“This is Prince?” I asked.
“Yeah,” Hambone said. “Prince is awesome. He’s a killer guitar player, too. You haven’t heard this?”
I had many moments like that with fellow musicians. My old roommate at the University of Kentucky put on “Musicology” during a jam session one time and I was like, “I didn’t know Prince got that funky.”
Then Prince played the Super Bowl in 2007 when the Colts beat the Bears in a rainy blowout. Being from Indianapolis, I was in Indiana at a sports bar in Bloomington watching that game with my best friends. That’s a night I’ll never forget. One of my best sports memories. And we were singing “Purple Rain.” It couldn’t have been more perfect. It hadn’t rained during a Super Bowl in 40 years.
Although I was into “Purple Rain,” I didn’t really seek Prince out, but he’d keep popping up, whether from someone telling a story about when they saw him playing a sensational drum solo at the age of 15 at a club in Minneapolis, a middle-aged man requesting him while I played an acoustic jam session at a dive bar in Glendive, Prince was around, and respect for him was evident among many walks of life. 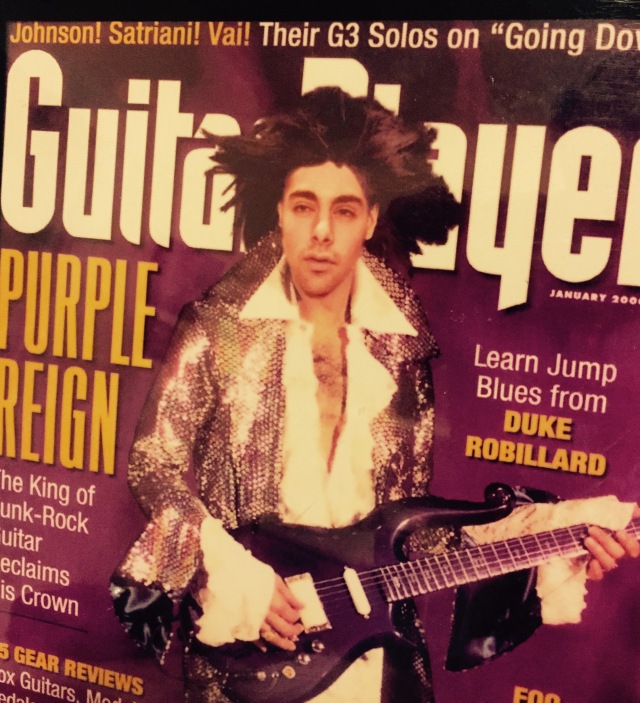 My Prince impression at Epcot December 2000

But it wasn’t until I met Kari, my fiancee, that I began to realize his magnificence.
Kari is a die-hard Prince fan. There is no other artist she gets as excited about, no other artist that makes her dance or sing like he does. This was clear when we had a dance party, getting down to Rolling Stone’s Top 500 Songs of All-Time early in our dating lives. I couldn’t believe how many songs he had on that countdown: “1999,” “Little Red Corvette,” “Purple Rain,” “When Doves Cry,” ”Kiss,” “Sign of the Times”  and “Nothing Compares (Sinead O’Connor sang it, of course, but he wrote it).”
I was blown away, and, after that, started paying more attention, listening to his albums and watching the movie, “Purple Rain.”  The opening live performance of “Let’s Go Crazy” in itself is worth watching.
Being a guitarist and singer and being in love with a Prince fan, it was only natural I started covering him a little, playing an acoustic version of “Purple Rain” and a chill, bluesy version of “Little Red Corvette” in the style of Mike Zito. I did them for Kari, but – while singing his songs and paying such close attention to his lyrics – I realized again how complete the songs were and how cool they were. I started playing “Purple Rain” with my band, with Headhunter playing the sax on the climax. We did this once when a storm was about to hit, and impact hit as soon as Headhunter started the solo, but that calming presence I felt in Georgetown hit me again. When you step into that world, you feel at ease.

April 21, 2016
When I saw an unusual story come in about someone not breathing at Paisley Park in Chanhassen, Minnesota, I didn’t want to believe it was Prince. We just lost Merle Haggard, Glenn Frey and David Bowie. Could it be?
At 57 years old, it was hard to accept that he was gone, especially for Kari.
When I called her at the library, she’d already heard. One of her childhood friends had sent her a text. Years ago, they’d vowed to go see a Prince show together someday. I could tell Kari had been crying when she told me. Kari had told me he was who she wanted to see more than anybody. Now she didn’t have that chance.
“He was looking great, was touring and putting out a lot of great music,” she said. “I just don’t understand. What was it? The flu? And he was found in an elevator? Was he trying to get help? Oh, that’s so sad.”
As you know, Prince broke the internet that day. Any concert footage or videos people could find, they posted. There were photos, anecdotes and tributes by fans, friends and stars like Bruce Springsteen, Chris Cornell, Chris Stapleton and others. We were all shocked, so we grieved together, many of us learning more about him throughout the day.

Paying tribute
Two days after Prince’s passing, I had a songwriter’s showcase in Lewistown, sharing the stage with local musicians and my father, who came up from Big Sky.
Kari was there with her mother, and they were both wearing purple.
Like my mother, Kari’s mom didn’t much care for Prince, either, but that night it didn’t matter. She grieved him with her daughter and my mom listened to my dad and I play “Purple Rain” as Headhunter stepped forward and played the sax. They were in it with us, and we grooved, we all blended together. People sang along and then moved their head back and forth as Headhunter brought it home. As the outro rolled on, we felt euphoric, just as Prince would want us to feel.
My dad couldn’t believe he’d just played along to Prince, putting in guitar fills that accentuated Headhunter’s solo.
“I thought I’d raised you better than this,” he joked.
Later that evening, I was able to show my dad what Prince was capable of by putting on his righteous solo during a 2004 Rock and Roll Hall of Fame performance of “While My Guitar Gently Weeps” with Tom Petty, Steve Winwood, Jeff Lynne and others. Unquestionably, he stole the show.
A phenomenal guitarist himself, my dad never put Prince in the same class as Jimi Hendrix, Eric Clapton and Jimmy Page when it came to guitar skill.
“That’s Prince?” he asked.
Prince could do it all, whether it be shock the audience with an out-of-this-world guitar solo, shock them with a remarkably bizarre wardrobe or belt a song out in a way that would put even Michael Jackson to shame. He is a great loss to the creative world and a great loss to musicians everywhere. Fortunately, however, he will live on, as he has enough music in the vault at Paisley Park to last another lifetime.
Whether a Prince fan or not, I’d say it’s hard to be a musician and not at least be a Prince appreciator. And if you haven’t given him a try, take a listen to “Purple Rain,” and let it guide you. As I listen to it now, I hope he’s in a place that looks and feels as majestic as the song sounds. 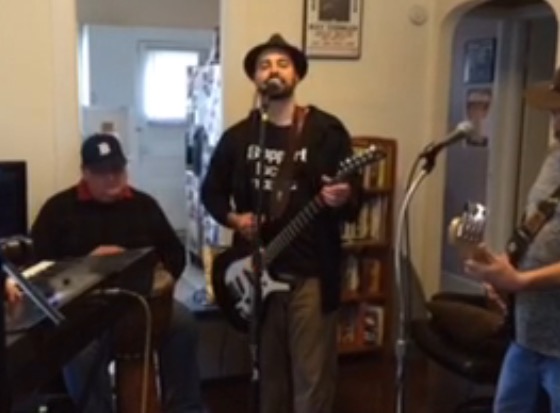 Afterword
Today, walking Lewistown’s Main Street with Kari after lunch, a calm, subtle rain coming down on us, we stepped into the outro all over again, as the end of “Purple Rain” played outside of the Western Bar. Kari, wearing a purple sweater, stopped our conversation, grabbed me, kissed me, and said, “Listen.”
And, together, we transcended, stepping back into Prince’s world, purifying ourselves in the waters of Lake Minnetonka.
Not really.
But we had a moment, and we had that moment just as many have around the world thanks to Prince’s vision, artistry, creativity, talent and his remarkable individuality. There will never be another like him.
Here’s to Prince and his Purple Reign. May he live on forever.

Originally from Indianapolis, Denison is a writer and musician who has picked up culture and influences from eccentrics all over the U.S. and even overseas. He is a University of Kentucky Journalism School grad and an award-winning Montana journalist. Through the years he's had work published by "Chicken Soup From the Soul," DVD Netflix, Montana Quarterly Magazine, NUVO and others. He has a solo album, "Whispers of the Lonely," blending country, folk, blues and soul, and plays regularly with his band, Groove Creek. Currently Denison works for the Lewistown Area Chamber of Commerce, teaches guitar and writes as much as possible, be it fiction or non-fiction.
View all posts by CharliesTrail →
This entry was posted in Creative nonfiction music journalism and tagged "Purple Rain", 2016, grief, Love, New Year's, Prince. Bookmark the permalink.