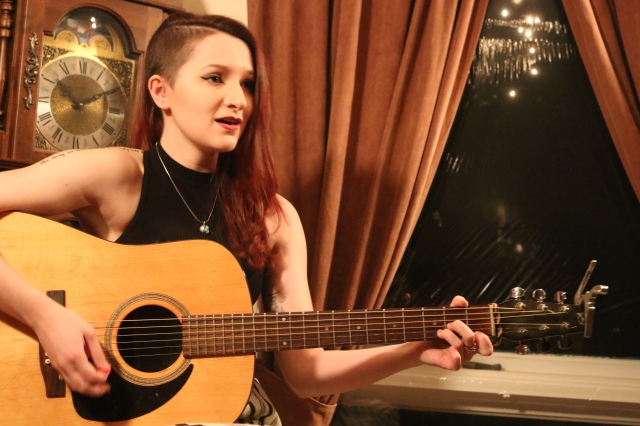 On Saturday night, Adessa Campbell, a 21-year-old lady wearing a black tank top and a striped skirt, long reddish brown hair shaved on one side, didn’t exactly give off the vibe of a Central Montanan. Not at first sight.
But Adessa, born and raised in Hobson, is indeed homegrown. Known for her fiddle playing and singing with the Bent Willows, her father’s band, Adessa is no longer the young, small-town girl people remember.
In the fall of 2013, Adessa moved to Boston, Massachusetts, to study at Berklee College of Music, where she’s received not just a music education but an education on what the world has to offer. She’s growing up, and she’s writing songs about it, living her life and opening up to all kinds of experiences.
The show at Dave Rummans’ house was less of a concert and more of a way to catch up with the girl most of the 25-30 in attendance knew since she was little.
“I watched you grow up, and it’s great to see who you’re becoming,” friend and fellow musician Randy Berry said. “Wow!”
Adessa’s mature sound is original, especially for the Central Montana area, as the music veers away from country and classic rock, instead taking more of a jazz, soul, blues and hip-hop route. Her deep, smooth voice is soothing and her melodies and progressions welcome her most impressive vocal talents. With grace and coolness, she makes performing appear effortless.
Her songs are also very personal, honest, often dark, always contemplative and sometimes pretty sexual, which at times made her mother a little nervous.
“Some of these songs I think should have a disclaimer,” her mother, Gerri, said. “Do you really have to say the f-word so much?”
Adessa handled the comment with playful wit.
“You’re not my demographic, Mom,” she joked.
And her mom’s timing couldn’t have been better to issue out a warning.
“You’re in for a treat, Mom,” Adessa said. “This next song is called ‘Cocaine.’”
Adessa did offer her own disclaimer for this song, letting her friends and family know she hadn’t actually tried cocaine.
During the controversial song, Adessa sang about vices and asked the question, “What is life without them?” In Boston, Adessa has learned a thing or two about her own vices, which has helped her establish her own voice. After all, experiencing life, she’s discovered, comes with its hardships and heartbreaks.
“A lot of your songs sound distressing,” one friend said between songs. “I feel sadness. It makes me wonder, ‘Is Adessa happy in Boston?’”
Adessa welcomed the question, and answered honestly.
“I wrote a lot of my songs at a dark point,” she said.
She went into a little detail here, recommending those in attendance never try to date their roommate. During the evening, she played a song specifically about how difficult that situation became. It was hands-down the saddest song of the evening, as she really put the listener inside her shoes.
Between songs, Adessa’s charming personality and contagious sense of humor kept people smiling and laughing, especially when she told the story of Alfredo the rat, a nasty rodent who popped out of her toilet one unpleasant morning at her Boston apartment.
“He was a cool little dude, but he was terrifying that early in the morning,” she said. “That’s like a girl’s biggest fear…something jumping out of the toilet. It touched my butt.”
“You see where the trauma comes from,” her mom joked.

Adessa performs, “Echoes” the first single for her album due out next month

Trying to lighten things up a little more throughout the evening, Adessa played a variety of covers, including Estelle’s “American Boy,” Nelly’s “Hot in Herre” and Usher’s “Yeah.”

Adessa also played Leonard Cohen’s “Hallelujah,” dedicating it to a friend of hers in Germany, who is in the hospital fearing a diagnosis of Hodgkin’s lymphoma. She encouraged those in attendance to sing along and think healing thoughts.
Despite the sorrow in some of the content, the “dark place” Adessa often referenced is no longer the place she’s in. Excited about her direction, Adessa shared she is studying music therapy.
“I teach life skills through music,” she said.
Some of the work she is doing includes songwriting with psychiatric patients, working with them on getting out their thoughts and ideas. She does most of this work at McLean Hospital, which is the asylum Susanna Kaysen’s book “Girl, Interrupted” is based on.
Adessa’s also proud of her band, Adessa on Bay State. Next month, they play to release their first full-length album, featuring all original material, some of which she performed Saturday.
Those interested in keeping in touch with Adessa’s musical progress can find her at http://www.adessaonbaystate.com.

(as published in the Lewistown News-Argus)

Originally from Indianapolis, Denison is a writer and musician who has picked up culture and influences from eccentrics all over the U.S. and even overseas. He is a University of Kentucky Journalism School grad and an award-winning Montana journalist. Through the years he's had work published by "Chicken Soup From the Soul," DVD Netflix, Montana Quarterly Magazine, NUVO and others. He has a solo album, "Whispers of the Lonely," blending country, folk, blues and soul, and plays regularly with his band, Groove Creek. Currently Denison works for the Lewistown Area Chamber of Commerce, teaches guitar and writes as much as possible, be it fiction or non-fiction.
View all posts by CharliesTrail →
This entry was posted in Creative nonfiction music journalism and tagged Adessa Campbell, Adessa on Bay State. Bookmark the permalink.