Posted on November 17, 2017 by CharliesTrail

“Hey, call the cops. I’ve just been shot,” the man said.
He walked slow, appearing tired, worn and shocked.
Had he been shot?
The man held his arm and walked haltingly and uncomfortably to the nearest seat in the lobby of the Cincinnati Greyhound Station.
I was there waiting to board a bus to Asheville, North Carolina, to spend time with my sister, brother-in-law and my two little nephews. I’d just been spending time with my fiancee’s family in South Lebanon, Ohio, a suburb of Cincinnati. I had planned on renting a car from the Cincinnati area, but no cars were available.
“We’re not really sure what’s going on,” a Florence, Kentucky Enterprise rental car employee told me. “I ain’t never seen it like this.”
Desperate to find a way to see my family, I checked the Greyhound schedule and found a late-night ride that’d get me there.
Little did I know by doing so I’d get acquainted with the violence all too common in Cincinnati City limits. 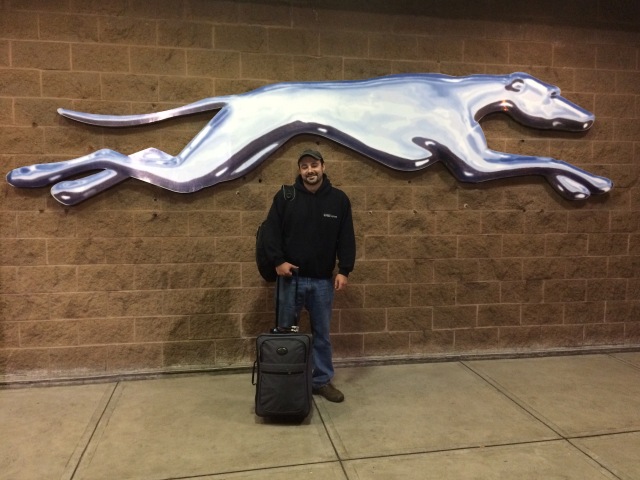 Holding his side, the man bent down and sat in a chair, looking like every move was torture.  I could see blood showing on his white boxers hanging out of his saggy jeans. As I looked closer, I could see more blood splattered on his navy blue hoodie. The man looked pale, almost lifeless.
“I’ve been shot,” he said with a weak, defeated voice, more to himself than to anyone else.
He put his head down briefly. I waited for him to say something else, unsure of what to do. I was shocked myself.
No one else had noticed him yet.
“Knoxville, Tennessee,” a Greyhound employee yelled. “Now boarding Knoxville.”
I thought about calling 9-1-1, but I kept thinking to myself, ‘where is the shooter?’ I could not shake the thought.
Surely the cops would be here any minute. Right?
He lifted his head and looked around. There was a little blood on his neck tattoos. I didn’t know how many times he’d been shot, but it looked like he’d definitely taken a bullet to the chest. The rest of the blood was probably a result of bloody fingers.
I started walking toward the boarding area, looking for an employee to tell about the troubled man.
“This man’s been shot,” I heard someone yell. Others gathered around the man as he collapsed on to the tile floor. In seconds, a big black police officer wearing a helmet walked through the double doors. He went right to the man, who now had a small gathering of people around him.
I later discovered, in an article by WSMV Cincinnati, the gunshot victim was a 34-year-old Bethel, Ohio resident who drove three miles from Avondale to Cincinnati before pulling over to get help. He had a 23-year-old woman with him in the vehicle. She was grazed in the knee by a bullet.
According to a news report, there are no suspects. The man claimed the gunshots came from another vehicle when they were at an intersection.
Sadly, this is just one example of Cincinnati crime spiking. According to a recent article in the Cincinnati Enquirer, the number of shootings on city streets has gone from 236 in 2014 to 320 in 2015 as of Sept. 1, and the year is far from over.
Although the shooting on Sept. 16 is technically an Avondale incident, it certainly made its way into the inner city and made an impression on those at the Greyhound Station, shining a negative light on the place once known to many as Porkopolis.
“This is bad for business,” a short black man with a small Afro said, as we got ready to board. “Let’s get the hell out of here.”
A girl in her twenties with short hair, tattoos on her arms and a piercing in her lip looked at me and said, “What the hell, man? This is my first time at a Greyhound Station.”
“Me too,” I said.

Taking a seat in the Greyhound, I listened to Marvin Gaye’s “Inner City Blues” as we passed the entrance to the station. It was lit up like the Vegas strip with blue and red lights. Cop cars, an ambulance, a news crew; it was a true crime scene. This wasn’t Lewistown, and it wasn’t where I could see myself living.
It is easy to take what we have for granted, but the more we travel the easier it is appreciate home.
Having the quality of life we do in a quiet, peaceful, safe, beautiful place – well, it’s hard to beat, and I’d take it over inner city life any day.
When you go out and see the world, you learn a lot about yourself. Even when you are out of your comfort zone starting at gunshot man, it’s worth it. It’s times like these when home is appreciated the most.

(as published in the Lewistown News-Argus Sept. 2015)

Originally from Indianapolis, Denison is a writer and musician who has picked up culture and influences from eccentrics all over the U.S. and even overseas. He is a University of Kentucky Journalism School grad and an award-winning Montana journalist. Through the years he's had work published by "Chicken Soup From the Soul," DVD Netflix, Montana Quarterly Magazine, NUVO and others. He has a solo album, "Whispers of the Lonely," blending country, folk, blues and soul, and plays regularly with his band, Groove Creek. Currently Denison works for the Lewistown Area Chamber of Commerce, teaches guitar and writes as much as possible, be it fiction or non-fiction.
View all posts by CharliesTrail →
This entry was posted in Crime and tagged Cincinnati, Greyhound Station, Gunshot, Travel. Bookmark the permalink.