My dad is well known for his surprises.

About two months before his 60th birthday, he Facetimed with a wild proposition.

Drinking his Fresca, we locked eyes through the phone screen and he said, “You know how I have been thinking of doing something wild and crazy for my 60th birthday? Well, I think I have an idea. How would you like to see the Rolling Stones in Boston? If you say ‘yes,’ I’ll get the tickets right now.”

The gritty adrenaline-fueled guitar riff of “Start Me Up” popped into my head immediately. It was like I was already there.

I already knew the answer to that. At times impulsive, my dad will present outlandish ideas. His mind works fast, too. I knew he had already outweighed the pros and cons of the plan.

Anticipation grew and grew as I geared up for my dad’s epic birthday, which coincidentally fell on Father’s day weekend.

“This is a perfect time for us to have one of our adventures,” he said.

We’ve had many: New York City, guitar camp in Connecticut, two trips from Louisville to Montana in a Ford F-150 and many more.

But seeing the Rolling Stones at the TD Garden in Boston – the city where my father was raised and went to college – might just take the cake.

The Rolling Stones: arguably the greatest rock ‘n’ roll band of all time besides the Beatles.
A big Beatles fan himself, my dad raised me on “Hard Day’s Night,” “Help,” “Sgt. Peppers” and all the other Beatles records. They were a big part of my childhood and are a big part of my life as a musician.

My dad, a retired Presbyterian pastor, has always known there are people out there who consider the Stones “evil,” but he was never able to deny their ability to make sensational rock songs. I remember him singing along to “Sympathy for the Devil” in the car, teaching me why it’s a great song.

“Listen to how they build the song up to the climax,” he said. “The background vocals, the guitar riff, it’s amazing song structure.”

Having just read Keith Richards’ memoir, “Life,” my dad was more excited about the band than ever. The Beatles might have rocked on “Let It Be,” but the Stones were always more the rock ‘n’ roll band.  And that’s what we were ready for: the ultimate rock ‘n’ roll show.

My Dad loving every minute of the Stones concert June 14, 2013 at TD Garden in Boston

After getting through a heightened amount of security personnel, we found our seats and began waiting for the action to start.
“The Stones don’t need an opening act,” my dad said. “Their fans warm themselves up by waiting 45 minutes.”
He was right. There was no opening act necessary. The lights went out, the spotlights went on, a mini-documentary interviewing famous fans and concert-goers in the ‘60s and 70’s played and then it happened: Mick Jagger, Keith Richards and Charlie Watts took the stage to a raucous applause. Now in their late sixties and early seventies, it was incredible to see three original members still together, keeping alive something greater than they ever could have imagined.

They still had it. 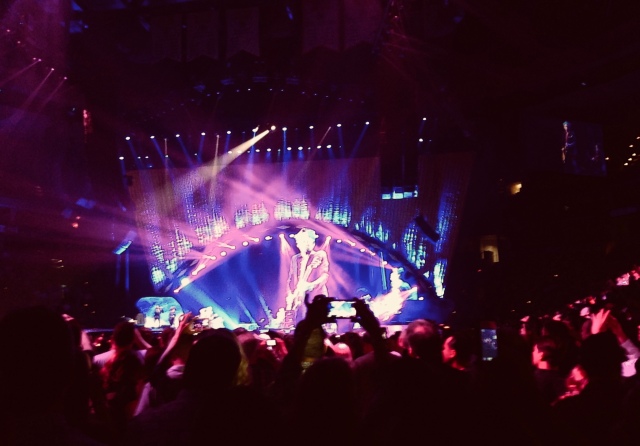 Keith Richards tears it up during “Sympathy for the Devil”

The Stones opened with “Get Off of My Cloud,” with nearly all 17,565 people in the sold-out crowd singing along.

Jagger held nothing back, doing his chicken dance, slithering around from one end of the stage to another. He even took off his long-sleeve shirt, revealing a tight black muscle shirt. At 69, the women were still screaming for him.
Although not all the guitar riffs sounded verbatim to the recordings, Richards played them with his signature coolness. He always made it work. Whether momentous or subtle, everything he played rocked, including the two songs he sang – one of which was a tribute to the early Delta blues.
Watts held down the beat and played the same drum patterns he did on recordings spanning the decades with perfect posture and the occasional smile.
With a career spanning nearly six decades, it’s no easy task to put together a set list that will please everyone, but they did it in Boston on June 14.
“I have seen the Stones 25 times and I’ve never heard them sound this good,” a guy next to us said after they played “Midnight Rambler.”

My dad and I had not seen them before, but we had been to several concerts together: Bruce Springsteen, B.B. King and Bobby Bland, Eric Clapton, to name a few, and this was perhaps the best show we had seen – together or otherwise.
This was especially on our minds when the Stones played “Sympathy for the Devil” and “You Can’t Always Get What You Want,” two of our favorites. My dad was giddy, displaying one of the biggest smiles I’d ever seen on him – and that’s saying a lot, because he’s often smiling.
The Stones closed with “Satisfaction,” which indeed satisfied the crowd. People were screaming, some in disbelief. My dad was one of them. So was I.

“The way I want to celebrate my 60th birthday is by seeing the Rolling Stones with my son,” he told me on the phone. “I can’t think of anything better.”

(inspired by column written for Lewistown News-Argus in June 2013)

Originally from Indianapolis, Denison is a writer and musician who has picked up culture and influences from eccentrics all over the U.S. and overseas. He is a University of Kentucky Journalism School grad and an award-winning Montana journalist. Through the years he's had work published by "Chicken Soup From the Soul," DVD Netflix, Montana Quarterly Magazine, NUVO and Americana Highways. He has a solo album, "Whispers of the Lonely," and continues to chip away at his first novel. Currently Denison is the editor of The Boulder Monitor in Boulder, Montana, where he lives with his wife.
View all posts by CharliesTrail →
This entry was posted in Music and tagged 60th birthday, Boston, Dad, father-son trips, Keith Richards, Mick Jagger, Rolling Stones, TD Garden, The Rolling Stones. Bookmark the permalink.