Posted on November 11, 2018 by CharliesTrail

To commemorate the 100th anniversary of Armistice Day I wanted to share a piece I wrote about a central Montanan whose served in the Great War. Here it is, as published in the Lewistown News-Argus:

Sergeant Albert “Bert” Replogle of Grass Range was in the thick of it.

A soldier in the 91st Division, known as the “Wild West Division,” Bert saw action during the Meuse-Argonne Offensive in France, the biggest American Offensive during World War I, which happened 100 years ago this month.

According to Bert’s youngest daughter, Ramona Bang (a Fergus grad now living in Florida), 2,700 American soldiers went into this battle and only 1,340 survived.

“So many were wounded,” Ramona said. “Dad liked to joke that any one of them who did not have shrapnel must have been hiding behind a tree.”

Bert was not one of those “hiding behind a tree.”

According to a letter he wrote to his brother, “Slim” Replogle, Bert was badly injured on the fourth day of the “Battle of the Argonne Forest,” as he called it. He was shot five times in the right leg, which led to the leg being amputated. In addition, his left thumb and two fingers on his right hand were shot off.

“There isn’t much left of me now, and I did not mind getting shot only I didn’t like to be put out of the fight when my company was still fighting, but I guess that was their last fight,” Bert wrote. “I would have been promoted soon if I hadn’t got wounded.”

Bert was in charge of 30 men during the battle. When the captain of the company found him, he was propped up against a tree.

Ramona said Bert liked to joke about this moment.

“He told us he played dead to avoid getting rebuked,” she said. “There was no rebuke.”

“The Captain talked to me like a father,” Bert wrote in his book “Whiskey Ayers for Governor.” “He praised the company for the splendid spirit we showed in the attack.” 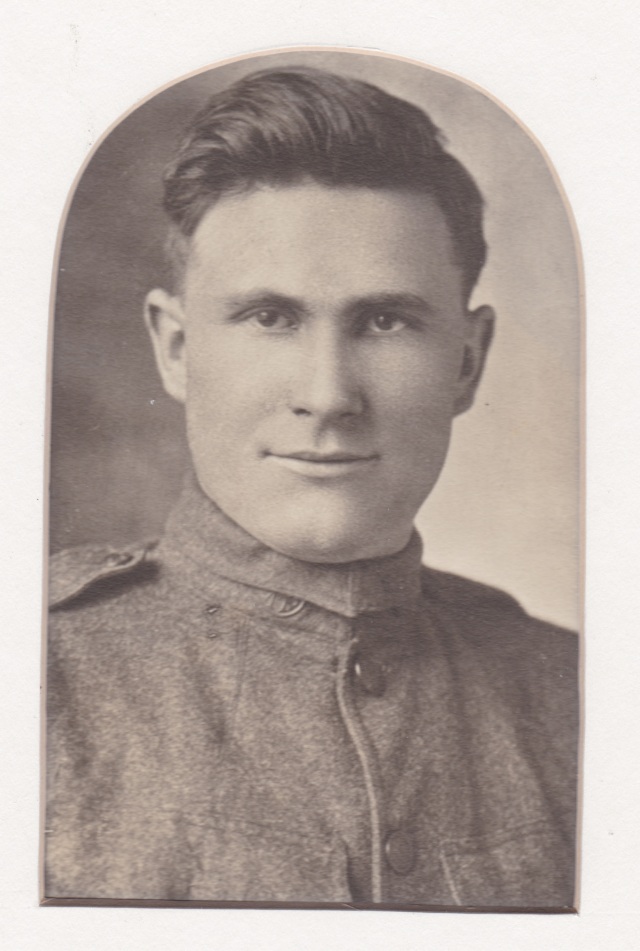 According to Bert, the battle was a critical turning point toward Allied victory, but it came at a cost.

“Our losses were very heavy. They used chlorine and mustard gas against us. Every single one of us took shrapnel,” Bert wrote in “The Meuse-Argonne Offense: Recollections from ‘The Wild West Division’ of the American Expeditionary Forces.” “We were hit with artillery fire, which continued steadily day and night. Orders came down to advance the next day at 7 a.m. regardless of the cost. Our objective was for a line of hills at Gesnes, hill 288. At 6:55, while we were adjusting our gas masks… a shell hit the middle of our section, killing over half of our men and wounding most of the others.”

It’s hard for Ramona to imagine the ugliness of the war her father experienced. He didn’t talk about it much with her at him, but that didn’t stop her from overhearing tales when she was young. Most of the stories she heard, however, were comical, as her father tried to stay upbeat once he returned.

“My dad never really lost his sense of humor,” Ramona said. “He would tell a lot of funny war stories at our big home in Lewistown, where my parents would host a lot of parties. My mom, Edith, was a social butterfly, too, and she liked to cook for her company.”

Edith was also passionate about the war. She even transcribed stories for her husband, who was unable to type due to the injuries he sustained.

Far too many also suffered injuries in the war.

“Ninety five thousand were injured in action,” Ramona said. “A lot of them were Montana boys.”

In fact, many of those seeing action were Montanans. According to the Montana Historical Society, Montana sent a larger percentage of its men to war than almost any other state.

“After the United States declared war on Germany, Austria-Hungary and the Ottoman Empire in April 1917, nearly 12,000 Montanans enthusiastically volunteered for service. After the passage of the Selective Service Act in May 1917, an additional 23,500 Montana men between the ages of 18 and 44 found themselves drafted into the military; this combined number represented roughly 17 percent of Montana’s draft-age male population, ” the MHS wrote in an online exhibit “Montana and the Great War.”

Ramona said it meant a lot to her father to serve. Despite the horrors, he wanted to do his part for America, but – more than anything – he wanted to come home.

“I think he was so grateful to come out alive when so many of his friends did not,” Ramona said. “He never showed remorse or self-pity. He just wanted to do his duty, fight, survive and get back to his homestead.”

Sadly, many members of the 91st infantry weren’t as lucky.

“More than half of the men in the 91st Division lost their lives,” Ramona said. “Five hundred were killed or wounded in the first five minutes, 1,500 in the first 45 minutes and 3,000 in the first found days. It was horrendous.”

Although damaged from the war, Bert pushed on, providing for his family and enjoying life in Central Montana. He especially enjoyed his horses. After hearing the screams of wounded horses during the war, Ramona said her father was always gentle to the horses they had at their stable on Main Street.

“He was always kind to them,” Ramona said. “I think part of that was to compensate for the hell he saw so many horses go through.”

When he came home, Bert was revered as a “war hero,” however, if you asked him, he was just doing his duty as a soldier and a patriot.

“During my services in World War I, I was intensely patriotic, and if I hadn’t been I would have been unable to carry on and conduct myself in such a manner as to receive promotion and recommendations from my superior officers.”

A man who believed in the cause, Bert tried to get down as much as he could about The Great War. Bert and Edith also recorded his post-war experiences as attorney, clerk of court and state legislator.

His journey into law, Ramona said, was particularly heroic.

“Physically unable to work his homestead, he studied law at night, went to Oklahoma to take the bar orally (one of the few states allowing oral exams) and came back with his law degree,” Ramona said.

It’s stories like this that pay tribute to the kind of man Bert was, Ramona said.

“He was a great man,” she said. “I adored him. He was badly crippled up in the war, but he kept on.

Bert did exactly what he promised his brother.

“I will come home and try to make something,” he wrote in a letter. “I think I should be able to do different kinds of work.”

Bert passed away in July of 1950, but his memory remains, thanks in part to his writings and recordings and the legacy he left as a hard-working legislator and clerk of court.

“He returned home to a hero’s welcome,” Ramona said.

Originally from Indianapolis, Denison is a writer and musician who has picked up culture and influences from eccentrics all over the U.S. and overseas. He is a University of Kentucky Journalism School grad and an award-winning Montana journalist. Through the years he's had work published by "Chicken Soup From the Soul," DVD Netflix, Montana Quarterly Magazine, NUVO and Americana Highways. He has a solo album, "Whispers of the Lonely," and continues to chip away at his first novel. Currently Denison is the editor of The Boulder Monitor in Boulder, Montana, where he lives with his wife.
View all posts by CharliesTrail →
This entry was posted in Inspirational, Survival, Veterans and tagged Armistice Day, Grass Range, Montana, Veterans Day, war hero, WWI. Bookmark the permalink.