Twenty-five years ago today, Green Day burst onto the scene with a playful, unhinged 8-song performance at Woodstock ’94 that ended in a full-out mud-throwing fight with the audience.

Armstrong paraded around with his guitar, his dark blue hair almost brown from the mud pies people chucked at him. The chaos erupted during “When I Come Around,” and it only escalated from there. As Armstrong ran from the fans, bassist Mike Dirnt laid on the ground, keeping the beat together while slithering in a pile of dirt. Drummer Tré Cool kept it steady, watching the insanity he helped unleash.

Such destructiveness on display may have outraged some members of older generations, but these three young rebels from the Bay Area captured the adolescent struggles felt by so many of America’s youth in the early ’90s.

And they did it by bringing punk to the mainstream.

“Punk has been one of the best kept secrets in the world, and we sort of went and blabbed to everybody about it,” Armstrong said in an interview earlier in ’94.

“Dookie,” their groundbreaking album, had released in February and quickly caught fire, launching the band into the international spotlight, making them one of the biggest bands around. They also hit at the right time, replacing Nirvana as the hottest new power trio.

I was 10 at the time. I didn’t even understand most of the lyrics or emotions associated with Green Day, but I liked their energy and intensity. They were reckless and fun, and I was young and impressionable. I couldn’t get enough.

I could identify with their self-expression, even if I couldn’t relate to their thoughts on sexual frustration, boredom, poverty and angst. I just like how it made me feel: wild, awake and alive. 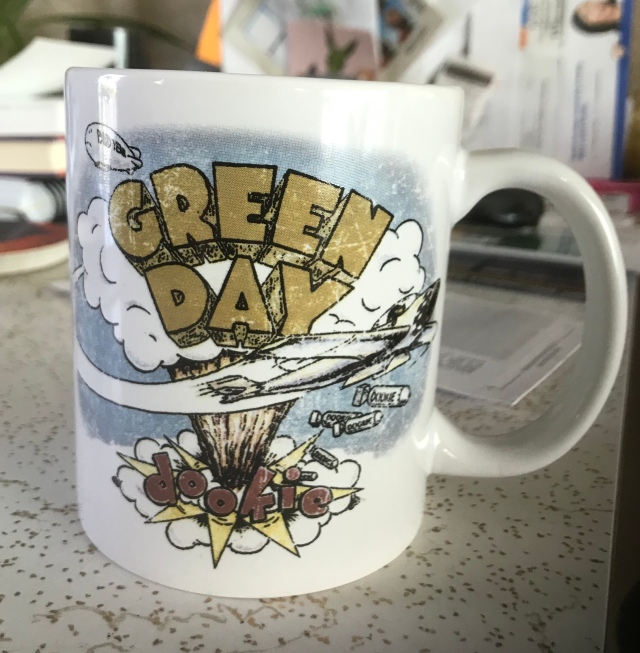 yes, this is my mug

I started playing guitar a few years after “Dookie” came out, and I wanted badly to play along with it. I’d make a lot of noise, but it took a long time before I was able to play songs by myself, let alone with others. My dad – an excellent guitar player – wanted to help light a fire in me to play more and often. He did just that. One day,  while I was having a Green Day listening session, he picked up my Fender Strat and jammed the shit out of “Basket Case.”

Giving me a nod as he set the guitar down, my Presbyterian pastor father said, “I kind of like Green Day. They’re fun.”

At the time I was also listening to Soundgarden, Pearl Jam, Nirvana and other grunge bands, whose lyrics often bothered my dad. The songs were too depressing, he said.

“The Day I Tried To Live? Like Suicide? Give me a break.”

But there was something different about Green Day. They might fit the bill of “complaint rock,” but they did so in a more playful, engaging way. They were extroverts, which set them apart from many other rockers of the era.

Instead of a sob story, Green Day’s hard-driving punk was witty, silly, simple and surprisingly poignant.

They also didn’t sound like anybody else. Sure, they were influenced by the Ramones, The Beatles, The Kinks, The Who and a plethora of other bands, but their sound was distinctly them, and Armstrong said that’s how is should be, as punk is meant to be personal

“Punk has always been about doing things your own way,” he said in an interview once. “What it represents for me is ultimate freedom and a sense of individuality.”

I could feel the independence associated with the genre, which in turn empowered me to find my own way to express myself. Once I started getting more disciplined as a guitar player, I learned how to use that self-expression musically.

Today I play out regularly with a band, a duo and as a soloist. This year I added “She” to most set lists as a way to pay tribute to “Dookie.”

As I continue to reflect on Green Day and their iconic Woodstock appearance, I reconnect with my young self and feel inspired to prioritize fun when performing. Young Green Day might be an extreme example, but their shows sparked something in their audience – they elevated them – and that’s what people want from a concert. They want to leave feeling elevated, they want to forget their troubles and release their anxiety.

This goes for a good album, too. Much has changed in the music world since “Dookie,” which only adds to its greatness. The raw, organic nature of the album makes the achievement more notable, and it’s aged remarkably well. It’s a masterpiece worth celebrating half a century later.

Originally from Indianapolis, Denison is a writer and musician who has picked up culture and influences from eccentrics all over the U.S. and overseas. He is a University of Kentucky Journalism School grad and an award-winning Montana journalist. Through the years he's had work published by "Chicken Soup From the Soul," DVD Netflix, Montana Quarterly Magazine, NUVO and Americana Highways. He has a solo album, "Whispers of the Lonely," and continues to chip away at his first novel. Currently Denison is the editor of The Boulder Monitor in Boulder, Montana, where he lives with his wife.
View all posts by CharliesTrail →
This entry was posted in Music and tagged Billie Joe Armstrong, Dookie, Green Day, Woodstock, Woodstock 94. Bookmark the permalink.